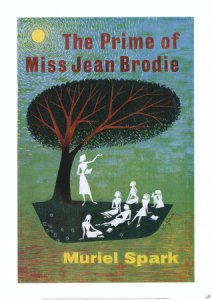 I’ve recently read a few books which have been compared to this only because the subject matter is similar: the effect on the young and impressionable made by a charismatic, rather shady teacher. And rather found myself thinking `comparisons are odious’ as the later books seemed variously overwritten or self-indulgent, or desperately trying to shock for shock’s sake, heavy-handed or crude.

it was an absolute delight to return for a re-read to the book those others were compared to – Muriel Spark‘s The Prime of Miss Jean Brodie.

This of course was turned into a film with Dame Maggie Smith as Miss Brodie, but I remember little about the film which I’m pretty sure pops up on TV from time to time, other than Dame Maggie, yet re-reading the book my memories were strong.

What I particularly appreciate is Spark’s economy. Books often seem to be getting longer and longer, often for no good reason, and I find myself longing for someone to have slashed and cut writing which can seem indulgent.

This is almost novella, rather than novel, length, yet jam packed with telling image and incident. Spark’s mind is glittering and incisive, her love of, and mastery of, language evident in each clean sentence: nothing fussy, nothing fudgy, a sense of an author who can weigh and balance her sentences almost as if they had a precise poetical form which needed to be adhered to. A sense of discipline and craft to counterpoint fine imagination and dark wit.

Her style is interesting, certain telling phrases get repeated and repeated in the text, almost like a mantra, as we move back and forwards in time between the little girls, meeting Miss Brodie as 10 and 11 year olds, jumping forwards and backwards to various incidents in the rest of their schooldays, sandwiched between future snapshots of what they will become as adults, and back again, moving also between Miss Brodie in her Prime, to a failing and elderly Miss Brodie, not in any linear progression, more as if all times and all becomings are always present, child and adult all together.

There are psychologically disturbing visions – the book is set in Edinburgh in the early 30’s, and Brodie’s feverish, strange world view not only encompasses artistic passion and sensibilities but is also more darkly attracted towards a fascination with the Fascists in Italy and Germany, as well as some rather shocking attempts to manipulate the budding sexual identities of her girls.

Somehow, Spark’s ability to be witty and light touch about all this, rather than heavy handedly telling the reader what to feel, is a brilliant balancing act

The Wiki article is interesting, revealing (unsurprisingly) that she was a poet before she

was a novelist, and also had taken a course in precis writing. Her complex relationship with religion (the child of Presbyterian/Jewish parents, she converted to Catholicism) and also questions about her sexual orientation act as central themes or subtexts in her writing. It is possible to see the central ‘Brodie girl’ as standing in part for Spark herself.

1 thought on “Muriel Spark – The Prime of Miss Jean Brodie”