Adult Faerie Tale, Book Review, Myths and Legends, Neil Gaiman, The Ocean At The End Of The Lane

Deep, Deeper, Deepest – oh why did this have to end! 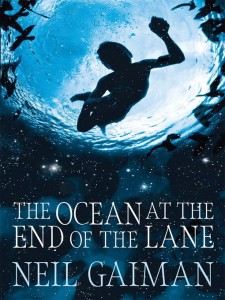 The central character, a man in middle age, with the disappointments of adult life upon him, turns down memory lane, when the death of a parent and the funeral gathering will unite him with the years passed. A failed marriage, work, creativity and the dreams of youth not having quite turned out in the way the younger man or boy might have wished he physically revisits where he once lived, as a seven year old boy, and recounts and remembers what the adult man has forgotten.

What makes this different from other ‘revisit childhood’ books is that the revisited land is large with powerful myths, and presided over by 3 potent female figures who live by ‘the ocean at the end of the lane’ The 3 powerful women a grandmother, a mother and an 11 year old (crone, mother, maiden)are constantly reminding this reader of other pagan and indeed religious threes – a matriachy of power and goodness to rival patriarchal religion, – including a willing sacrifice – the three Fates of Greek mythology, even as they appear to be initially easily dismissed perhaps as the three witches.

Gaiman narrates a brilliant story – more than a battle between good and ill (is it really good to have all desires met – even the desire to be happy?) but under the tight and page turning narrative drive, the fine writing, the believable characters and relationships, philosophical and psychological insights are placed for the reader to chew on.

Its certainly a book which might be enjoyed by a child, even read to a child, especially as the central character is a child, but it reaches, I think, to the wisdom within a child, and to the child within an adult:

As Gaiman has his central character say:

I also liked the absolute truth (so it seems to me) of this:

Grown-ups don’t look like grown-ups on the inside. Outside, they’re big and thoughtless and they always know what they’re doing. Inside, they look just like they always have. like they did when they were your age. The truth is, there aren’t any grown-ups. Not one, in the whole wide world.

And, if you don’t like that sort of psychology, what about the plunges into transcendental experience – perhaps the experience much fine poetry and music takes us towards:

In those dreams I spoke that language too, the first language, and i had dominion over the nature of all that was real. In my dream, it was the tongue of what is, and anything spoken in it becomes real,, because nothing said in that language can be a lie. it is the most basic building block of everything.

As adults, we have (in the main) forgotten the power of words, of the naming of things, of how potent the dominion of naming and language must have been to our species. And why (some of us) venerate poets, who give us back that place 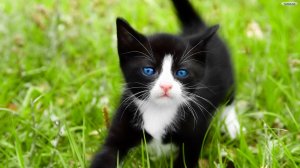 Ailurophiles will appreciate the central part cats play in this book!