May and December love story, seen through ancient myths

Amy Sackville is a wonderfully tender, lyrical writer, with a real gift for describing the intensity and precision of emotional experience, the being-present-in-the-world, the here and now, whether that is in descriptions of that world itself (particularly landscapes) or the intensity and precision of what it feels like to properly experience one’s own internal emotional landscape – what does it precisely feel like, what is the physical heft and weave of jealousy, fear, loneliness etc

However, what is her gift, also is her Achilles heel – she can get caught in the lyricism of the moment and lack momentum to gather and drive narrative forward.

This was certainly true in her beautifully written first novel, The Still Point and is true still with Orkney, though to a lesser extent.

Nonetheless, this is a delicate and powerful book, tangling up deep abiding myths; always satisfying, the myths than come from several different cultures and historical times ARE so satisfying because they come from a deep unconscious, collective unconscious, place. 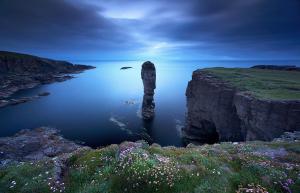 In Orkney, the narrator is a literature professor, Professor – (his name is not given) a 60 year old man who has specialised in those myths, particularly myths of female enchanters with a watery connection – Circe, Undine, Melusine, the selkie myths, mermen and mermaids, the Sirens. He is the December part of the love story, his mysterious ‘May’ is a curious young woman, often referred to by reference to those Undines, Ondines, Sirens, but otherwise described as ‘my wife’. She is one of his students, some 40 years younger. The two have very recently married and the narrative is an account of their 12 day honeymoon on Orkney. Anyone who has any familiarity with any of the selkie myths, from stories or from folk songs, will immediately be aware of the story, and anyone unfamiliar, will pretty quickly become familiar because the versions of the story are liberally referred to in the text.

The delight of the book is NOT ‘what happens’ – we rather know that right from the start, it is rather, how does it feel that this is the story. And more importantly, how can we balance the absolute intensity and possession of overwhelming love, with the fact that love will always end, the beloved will leave, or die, or love itself dim away from that intense and overwhelming place. And then. How do we live then?

I loved the strange story; I loved her evocation of the landscape, but as mentioned earlier, there were times this got a little too drawn out – particularly the verbal games the Professor and ‘my wife’ played, in describing the muted and subtle colours of the landscape. Sackville clearly has an artist’s eye, and paints the world with beautiful words; I could really see the refined shades, the textures in the water and the mist she was describing, but perhaps this occurred 2 or 3 times too often, so that I began to have a snagged sense of ‘here we go again, another high, fine poetic moment – a bit like a set piece’ – when the journey’s end of story really needed steering towards. ‘The

story, the narrative drive’ is of course something which traditional myths and faerie stories manage superbly – in many ways, character is broad brush, the journey of the story IS the story – I would have liked a little more of that economy in Orkney.

Nonetheless I will certainly be looking forward to book number 3. Sackville is an interesting, accomplished and absorbing writer.

Here is a sample of her delicate humour (an excerpt describing cookery skills, or their lack)

She has a gift for the contrary, for transforming innate qualities into their opposites: crisp leaves turn to mulch, the most tender meat toughens, what might be moist stales in her keeping to become heavy and dry; even tinned custard, in her custody, somehow becomes lumpen

and, secondly, of that painter’s eye for landscape, describing the moment when a wild, savage storm begins to clear.

And then all at once, a crack appeared in the cloud, the sun at one corner of it like a god’s eye, casting a piercing landscape across the sky, and then one after another, rods of silver broke through to announce his presence. Like some awful ruthless salvation, the sun burned the edge of the cloud-bank magnesium white, and shone brilliant on the still-tender, cleansed world; the rock pools transformed into blinding mirrors and the sea, so lately needled to fury, was lulled and banded with whispering silver as it approached the shore, and there was the terrible argent fire of the cloud’s lining after the storm