The affair between man, woman and the divine 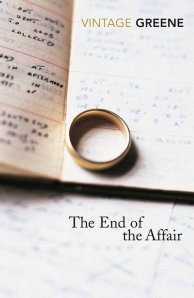 This is my absolute favourite of Graham Greene‘s books, and one I reread every 5 years or so.

Obviously I know absolutely ‘what happens’ but am always moved by the intensity of the journey, the depth of characterisation and the struggles engaged in by the central characters

The familiar Greene territory is all here – betrayal, guilt, responsibility, sin and redemption, and the uneasy, unwilling nature of faith, belief and spiritual identity

Unlike the works which are set in foreign or exotic locations, this book is set in a more pedestrian territory, blitz torn London, and whilst ‘the affair’ of the book is ostensibly one that happens between a man and a woman, the underneath or overriding affair or relationship is that between a man/woman and his or her understanding of God.

This is a very common theme for Greene, and of course mirrors his own relationship

with his faith – never easy, never taken for granted, always a sense of the soul wrangling with an accommodation with Divinity.

This is a wonderful and often bleak book, and, with a female as well as a male central character, and the relationship between the sexes as pivotal, it may speak to anyone who has ever fallen in love and found themselves caught in a minefield of conflicting loyalties, secrecy and deception

Something else I admire in this book, with a tendency, it seems, for many current writers to say more than they need to, is Greene’s economy with words. This is a slim volume, clear, but rich and layered. Greene knew how to cut away the unneeded flab, and give each word its due weight. A masterly exercise in precision, and the avoidance of self-indulgence. A quick. clear read, but it burrows in deep.

8 thoughts on “Graham Greene – The End of The Affair”