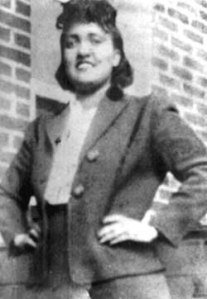 In 1951 human tissue culture was in its infancy, with researchers struggling to keep cells alive beyond a few cellular generations; normal cells are subject to apoptosis (programmed cellular lifespan/death)

Henrietta Lacks, a poor young black woman, was admitted to hospital in Baltimore in 1951 with an exceptionally invasive and aggressive cancer.

A standard biopsy was taken of her cancerous cells. She did not know that the biopsy would not be used purely for diagnostic purposes, but also tissues would be used for research. No consent was sought for this. In 1951 and indeed still today samples of tissue taken for diagnostic purposes can be used for other purposes – we do not own our tissues once they are no longer part of us.

Cancer cells are not subject to apoptosis. The particular aggressiveness of Henrietta Lacks’ cancer 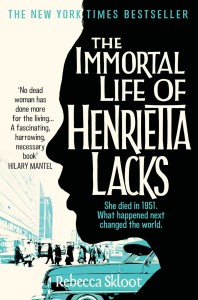 yielded astonishing results for tissue culture, and within a short space of time the `HeLa’ cell line was being used for a wide number of medical research studies world wide, whether testing the actions of many pharmaceutical drugs or as part of the human genome project, and more.

`HeLa’ has had profound, beneficial effects on probably most of us who benefit from modern medicine. HeLa has earned millions of dollars and much prestige for many predominantly white male scientists, as patents have been taken out on advances only possible through tissue culture using the HeLa line

However, Henrietta’s family were unaware of the rich legacy she left the world – or the rich financial legacy reaped by institutions and individuals. In fact, they remained poor and unable to afford healthcare.

Rebecca Skloot has written an angering, compassionate and educative book, looking not only at the science made possible by HeLa – but also exposing the arrogance, hypocrisy and callousness of some individuals and establishments within scientific research. She also tells the story of Henrietta and the Lacks family – indeed, formed strong relationships with that family. Inevitably, given time and place the book is also a shameful expose of how America used its poor in unethical `research’ very little different from the `research’ which Mengele and others were using in concentration camps a decade or so earlier

This book pulls no punches, and may not be for those sensitive to medical issues – there are graphic descriptions of medical procedures and the ravages of terminal illness. It is, however, extraordinary.