Amanda Craig, a writer who was born and spent formative years in South Africa, but

now lives in London, combines the ability to create hugely satisfying narratives, deal with meaningful subjects in a non-polemical manner, people her worlds with well-written characters, and, at sparingly chosen points, offer beautiful, lyrical, elevated, writing, without being self-consciously ‘poetic’

In many ways, she reminds me of another author, Barbara Trapido, again with a South African childhood, as both share the ability to look at England both from within and without, give deep themes a light touch, and enjoy at times playing with myths, fairy stories or adaptations of classic plays into a more modern, ironic setting.

Hearts and Minds looks at London and twenty-first century England, through the eyes of 5 immigrants. 3 of them are legal, privileged, middle class migrants, 2 are illegals, one an ‘economic’ migrant from Eastern Europe, the other, victim of Mugabe-torn Zimbabwe.

Craig likens her approach with this book to Dickens – she is at heart a storyteller, a narrator, but also has investigative journalist skills, and researches the hidden, dirty, foetid underbelly of London life to give realism and credence to the story she weaves from her research. In many ways, this wonderful book reminded me less of Dickens than of another Victorian great, Trollope’s The Way We Live Now (Penguin Classics), a clear-eyed portrayal of the hypocritical face of Victorian England and the corruption and savagery behind the mask.

Craig’s often satirical, slightly savage pen, when dealing with some of the powerful movers and shakers of society, is heightened because she is always able to write from the heart.

She recounts the truth of terrible things, from the heavy handed methods of political dictators to the savagery visited upon women, seen as commodities to be trafficked, to the whittling away of compassion by the corporate state, obsessed with number crunching whilst forgetting the human edge behind the numbers. Her writing in this book fills the reader with desolation, despair at the sense we are heading towards destruction – but we are held, always, on the edge of realising redemption through the tiny accretions of goodness, individuals in their small ways making a huge difference. All of her immigrants have their hopeful humanity to the fore. These ordinary people, making a difference are, I guess, how we all hope to be, in our best dreams for ourselves.

As an added little ‘fillip’ for keen Craig readers, many characters from earlier novels flit through the pages – clever Craig for using memorable names – Ivo Sponge, Hemani, et al. Some of these characters have a central role in this book – human rights lawyer Polly, for example, some are briefly glimpsed – for example, Benedick, central character in my personal ‘Craig favourite’ – In A Dark Wood – is briefly recognised by one of the central 5 in this book, as a ‘famous face’ in the audience at a concert. This book, like all Craig’s writing, is a perfect ‘stand-alone’; one doesn’t NEED to have read any of the other books. Her insertion of ‘regular cast members’ is not a writer showing off, or trying to make her fans feel self-congratulatory at spotting the allusion – what it does do, is to add to something which permeates her writing – the sense of connectedness, despite our solipsistic tendency to think we may live our lives in disconnect. A book of darkness, despair – and fiercely warm hopefulness. Years a writing, as Craig was seriously ill for some time during its gestation, very well worth waiting for. I hope her next one will happen sooner rather than later.

I’ve long felt that Amanda Craig is an under-rated writer, and am not really sure why she seems not to get the attention she deserves. In a world where almost any moderate writer is often puffed into genius by the publicity machine, it seems there may be much better writers who languish, and whose jewel like work sparkles unseen.

I think Craig is in one such: thoughtful, perceptive, creative, with a fine sense of crafting a story and interesting, layered characters.

In A Dark Wood is one of my favourite books of hers. She is a writer who often recycles her characters, so

someone who was a minor (or even a major) character in one novel will appear as a major (or bit-part player) in another. Each book however stands on its own, but the Craig-aficionado will get a little frisson of extra pleasure as someone from another book makes an entrance (she cleverly uses memorable names, hence even the forgetful will get that nudge!)

I have recently read a little spate of books where writers have been weaving (or over-weaving) myth into their writing, and this has seemed gratuitous or a creative writing device, or self-indulgent. Oh that they had read Craig, and learned to do it WELL! This is an old book now, but I still think it is a powerful one, and has stayed in my consciousness. 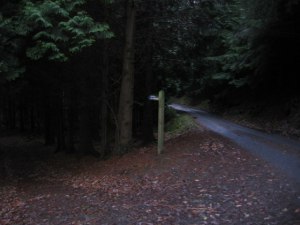 Darker and more heartbreaking than her other books, Craig weaves powerful myths and fairy stories through the journey made by the central character, an actor coming to terms with the breakup of his marriage.

She explores, as she often does, the complex relationship between parents and children, a power struggle, held by love and need on both sides.

Initially the book seems as if this will be its major focus. Benedick, the central character, finds that the world of fairy and myth, as exemplified by his dead mother’s book, which he reads to his young son, fractures through into his own life, so that the meaning of the stories seem to be echoed in what is happening to him. As the book continues it becomes clear there is a deeper layer to the story, a dark descent into mental illness, a tragedy that has passed through the generations. Craig is both an easy, effortless read, and a profound one – and I can feel a desire to re-read her books coming on fast!
In a Dark Wood Amazon UK
In a Dark Wood Amazon USA