I first read this years ago, and though I have thought that as a genre science fiction is not something I’m particularly interested in, of course, in the hands of a fine writer (Wyndham was) it provides a brilliant way of taking a more reflective look at our own society.

Written in the 50s, where the grim realities of the devastation of war, the destructive power of nuclear weapons, and the use of propaganda and control were hugely in use – the Cold War creating bogeymen from both sides of the Iron Curtain – this dystopian view of a world destroyed by some long ago catastrophe (clearly the fall out from nuclear Armageddon) must have seemed particularly potent.

Society is once again primitive and there is total control exercised by fundamentalist Christianity – its like going back to the seventeenth century and the fear of witchcraft – except the society being pictured is clearly both the America of McCarthyism and the Russia of Stalin. Here, birth defects (caused, the reader quickly realises, through the effects of widespread deviation) are feared, seen as evidence of God’s punishment and disfavour. Such deviation from the norm – whether in humans, other animals or vegetables, must be destroyed.

But what about deviation which may not be visible – a deviation of thought – here is where the parallels between the McCarthy witchhunts and their terror of reds under the bed, and those reds’ own terror of deviation from received thinking – become clear.

Wyndham wraps this all together in an exciting plot-line, with the central characters, and the hopes for a better future, residing in the young. 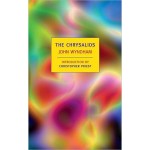 within the characters themselves. He is that wonderful mixture – a superb storyteller, a creator of interesting and layered characters, and a writer with something to say.

This is enough to make me want to revisit all the other post war, on-the-edge-of-a-nuclear-apocalypse territory writing Wyndham created. I never particularly think of Wyndham as a science fiction writer (which he is) but purely as a writer. And a very fine one, at that