Once again Ghazal prove they have much more to say to each other in the conversations which particularly the kamancheh and sitar, but also tabla and occasional vocals, are enjoying

In Fire In My Heart the sitar and kamancheh weave around and through each other,

somehow conveying an ineffable longing, romantic and spacious, melancholy and sorrowful. It’s curiously mortal music, seeming to exist in a place which is always aware of the passing of time, that everything fades and dies, whilst it savours the moment most deeply. The vocals fall into the places gently, floating and weaving through the instruments. What strikes me so much with Ghazal is a sense of the musicians deeply listening to each other, and deeply listening to the music which is arising, whether this is reflective, or catching the moment when the mood changes, as in the second half of the first track, and becomes shimmery, brilliant and dynamic, inviting the tabla to drive this with excitement. This is a wonderful piece to dance to, as in Gabrielle Roth, Five Rhythms, allowing the music to move through the body of the listener, from flowing through staccato, chaos, lyrical and a return to stillness

The second track, Pari Mahal almost has a circle dance feel to it, with its flamboyance,

trotting rhythms, dips and glides. The music and musicians show off their skills – the piece almost seems to touch close to a more Western `jamming session’, even including a small central section which sounds incredibly Celtic! Hoots Och Aye!

The final long track Besh’no az Nay seems a little more prosaic than the high wildness of the first track, a retelling of tall tales, favourite old jokes and happy moments by a group of friends at ease in each others’ company, the vocals creamy and seductive. A track to be listened to whilst savouring fine sweetmeats and small glasses of tea!
Moon Rise Over The Silk Road Amazon UK
Moon Rise Over The Silk Road Amazon USA 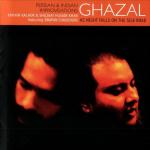 ‘Felt In The Blood, and Felt Along The Heart’

I expect music to inhabit me, to possess me, and to speak to something I barely understand, and cannot conceptualise. The last thing i want from music is that it should be ‘a background’ – it must be an experience.

And so it is with ‘As Night Falls on the Silk Road’. This skillful and sensitive blending of the Iranian spike fiddle and the Indian sitar, tabla and devotional vocal certainly IS felt viscerally, emotionally. The bent notes of Shujaat Hussain Khan‘s sitar and

swell. There are tracks which demand the listener to move and dance under the stars (Snowy Mountains) and others, such as the longest and final track, Traces of the Beloved, which move with ease between still, internal reflection and explosion into unstoppable movement – a perfect balance between the motions of the heart itself, as it pauses and receptively fills with blood, and forcefully expels that blood through the ventricles. Heart music indeed; diastole and systole. Gorgeous.

Ghazal are an amazing and enhancing fusion group and the fine and wonderful players,

For some obscure reason the live link to mp3 samples won’t work on the USA site – you need to choose the mp3 option once on the product page. Lucky UK Amazonians can find the samples no problem!

Fragile and persistent shoots of humanity keep struggling through

Vasily Grossman was a Ukrainian journalist, a Jew, who wrote this searing book, an

expose of the Janus face of totalitarianism, whether of the left or the right, in 1960 after Stalin’s death. Though the book was submitted for publication in Russia, it was suppressed and copies destroyed, as too dangerous. The book had a strange life, as a copy on microfilm was smuggled out into the West after Grossman’s death (1964) – it would clearly have endangered his life had this happened whilst he was still alive, and the book finally was published in the West in 1980, and not in his native land until 1988

It took me a long time to finally finish reading this difficult, painful book. Not because it is poorly written, but because its subject matter, set around the siege of Stalingrad, and the squaring up of 2 totalitarian systems against each other, carries too much awful cruelty and dreadful reality to easily stay with. We are talking the atrocities of both the Nazi concentration camps and the Soviet gulags here. The systematic excesses of ideologies which believed that the ends justify the means. Wherever such isms get in the way of ‘humanity’, the road to expending humanity itself as an unfortunate statistic is walked down.

Grossman’s powerful book achieves its effect not through a blow-by-blow graphic account of torture, elimination and cruelty, but through a constant searching for, and a belief, in the ordinary, powerful smallness of the individual, through a passionate belief in the value of the individual – not in some ghastly Randian hierarchical way – in a way which values the unique preciousness of each individual life. Time and again, Grossman sets the impersonalities of the state machine (whether of the left or the right) its inhumaneness and its ability to negate and destroy life, individual experience, warm connection and empathy, versus the sometimes irrational reality of the ‘human’ response. Powerful images of what this means are given in such instances as the actions of the childless, middle aged Jewish doctor, instinctively seeking to shield the motherless young boy with her own body, as they stand in the killing shower rooms, breathing in cyanide gas. This image, of humanity breaking through surfaces again in the elderly Russian woman, against all reason, offering a crust of bread to a German, following the surrender of the German army. Grossman understands the pressures by which our humanity is eroded. This is a book written not in hatred of ‘the enemy’, be they ‘the Germans’ ‘the kulaks’ ‘the Bolsheviks’

‘the Mensheviks’ – but with a passionate affirmation that the answer can only lie in ‘the human response’, not in the ideological response.Despite the dreadfulness of the subject matter, and what it says about us as a species, this remains a passionately hopeful book, one on the side of ‘life’, giving us, again and again, these images of the human moment, the friendship, the love, the compassion, the empathy, the very persistence of life itself, seeking to break through.
Life and Fate Amazon UK
Life and Fate Amazon USA